Sponsoring a school in
India with
The Akshaya Patra
Foundation

The Akshaya Patra Foundation (TAPF) is a children's charity headquartered in Bengaluru, India which strives to eliminate classroom hunger and thereby support the right to an education of socio-economically challenged children through the midday meal programme. This is the world’s largest of its school meals programmes which now serves over 1.8 million children across over 19,000 schools daily.

A fresh, hot, and nutritious lunch is served to children attending government schools and government-aided schools across 12 states and two Union territories in India. The programme is run in partnership with the Government of India appropriate State Governments along with the support of individuals, corporates, and other benefactors.

Just £15 can feed one child in India, for the entire school year.

The cost is kept low due to several factors – Government match funding, food production economies of scale via  state-of-the-art kitchens , use of technology like Artificial Intelligence (AI) and Blockchain etc to drive efficiencies. With over 19,000 schools supported, a donor can choose to sponsor the midday meals for every child attending a particular school in India rather than making a general donation.

We can help you choose a school that needs urgent support. If you wish to pick a school from a particular region in India, please let us know. A donor can choose to sponsor multiple schools if they so wish. To manage the associated administration, we ask that donors adhere to a minimum commitment of £1,200 (i.e.supporting 100 children) annually.

Donors can fund their sponsorship either with a one-off donation or by making monthly direct debit payments which are preferred as they allow sponsorships to be automatically renewed annually.

Benefits of Sponsoring a School 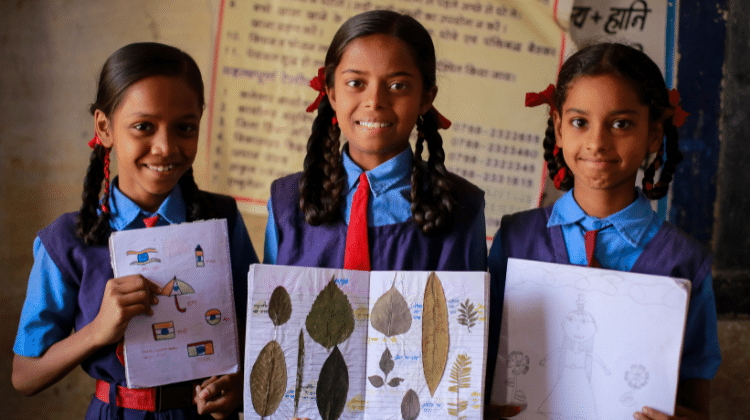 Impact of your School Donations

The school sponsorship programme has transformed the lives of thousands of children since its inception across India, by nourishing impoverished children, increasing enrolment, attendance and focus at school, thereby allowing them to flourish and succeed in life and break the cycle of poverty for generations. An outcome that has surpassed all expectations! Read stories of hope from young children who receive our mid-day meals and adopt a school of your choice today.

Wish to sponsor a school in India?   CLICK HERE