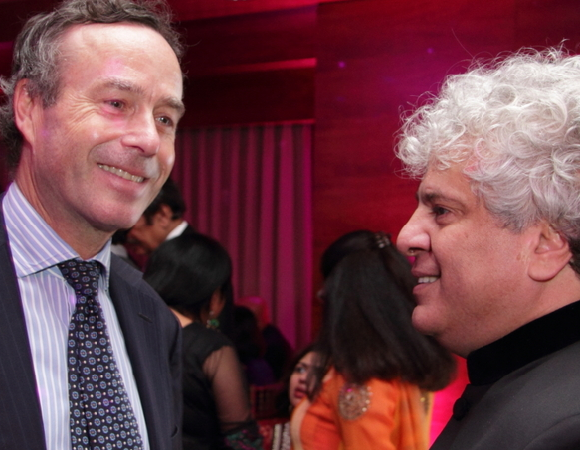 Over 300 guests came together on 18th September 2014 in the beautiful surroundings of the Four Seasons Hotel in Park Lane, London for our second Sparkle Ball

Over 300 guests came together on 18th September 2014 in the beautiful surroundings of the Four Seasons Hotel in Park Lane, London for our second Sparkle Ball. Lionel Barber, Editor in Chief of the Financial Times, spoke about our life changing work in India. He then shared his thoughts on the imminent Scottish referendum, the outcome of which was to be revealed that day.

A beautiful starter plate was followed by the main course, served in three compartment steel lunch boxes (tiffins). A tag dangling from the tiffins explained that this was an example of a school meal served from an Akshaya Patra kitchen in India, which costs just 5 pence for us to provide.

Nobel laureate, author and scriptwriter Javed Akhtar kept the audience mesmerised with his incredible poetry. This was followed by a Q&A with Suhel Seth, who could not resist including Shashi Tharoor, an Indian politician and MP sitting amongst the audience, who is known for his wit. The pair answered some of the questions posed by the audience on current cinema, and the changing political scene in India.

Javed Akhtar had written a song to commemorate Akshaya Patra serving its one billionth meal in 2012, which was composed by A. R. Rahman and sung by Shankar Mahadevan.

The night concluded with guests being entertained by melodious Bollywood songs sung by Navin Kundra.